Today is the seventh day of summer. Yup – a whole week of summer done and gone already. How many days are there in summer anyway? I suspect the only meaningful answer is ‘Not Enough’.

Today is also the fifth day of free-running drainage. The odious aroma awakened by our diggery-pokery that lingered in the bathroom, leaked into the kitchen, and gently wafted though the rest of the house, is at last beginning to subside. The disgusting pool of vile has also undergone an intriguing transformation, and continues to be a source of fascination and photo opportunity for certain sad people who clearly have nothing better to do with their time. (Yes, that would be me.)

The day following the Surge of Victory we noticed that, although the level of noxiousness in the pool was a little lower, the pool seemed to have self-lined with an impervious layer of tarry silt that covered and smoothed the contours of the ground over which the gush had flooded, and seemed to be preventing a timely soaking-away of the remaining shroud of grey. 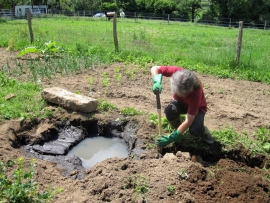 Despite the fact that he had declared the day a weekend, Plumber Man could not resist a little further intervention with his spade, and he set about digging a short trench to provide the noxiousness with a bigger surface area through which to vanish.

Is it at times like this that I feel a little tug of envy. One of my favourite childhood activities was building sandcastles on the beach in my home town of Hastings. Well, not so much the building of the castles – more the construction of the moats that surrounded them. Glorious affairs, edged with curly, creamy pink and yellow shells and spanned by driftwood bridges, with a channel running to the rolling edge of the sea. The gentle ends of waves that unfolded on to the acres of flat sand like an ever-shifting bedspread would fill the moat with foamy brown joy that lived for a brief moment in the small world I had created, before melting inexorably away. An early introduction to the poignant pleasures of transience. 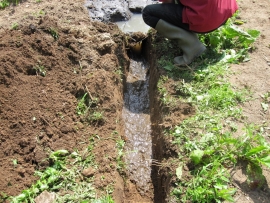 What I mean to say is, despite the smell and the nastiness of the materials involved in our current shovelling shenanigans, there is still great pleasure to be had in the digging of pools and trenches, and the creating of cascades of flow that spill and tumble into runnels and puddles, to disappear silently into the unquenchable earth. There is also pleasure to be had in the watching-of-the-digging, but nothing can quite compare with the feeling of that tiny moment when the spade sinks into the last thin sliver of soil supporting the dam, to let loose the flood. 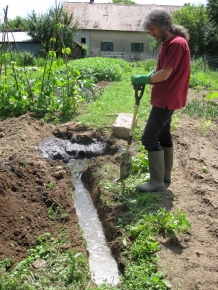 To be fair, Simon did notice the tinge of barely-constrained yearning that pervaded my restless watching-of-the-digging, and offer to let me do it. But after his courageous wielding of the drain rods the previous day, I felt it would be churlish to deny him the opportunity to thoroughly enjoy the fruits of his revolting endeavours. So he ceremoniously opened the flood gates, and we watched in fascination as the deluge poured into the perfectly judged trench, coming to rest about 2 cms from the brim, at the deepest point, and leaving a thin, smooth coating of black lava-like sludge over the floor and sides of the now empty pool. 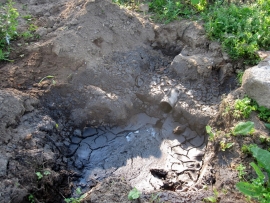 Over the next couple of hours the liquid in the trench drained away, and each successive flushing through of the pipe washed out a little more of the vile blackness, so that it now also coats the bottom of the trench, but not so thickly as to prevent water draining through it. We have taken turns at watching the trench fill slowly as a shower-load of water and foam washes through, and have delighted in the brief replacement of the fading pong with a hint of fruity-smelling shampoo. And when there is no water in the trench, the hot sun dries the black sludge to the consistency of rubber, so that it is now cracking and peeling off the highest edges of the erstwhile pool of vile, in a way that makes me want to touch it. Almost.

Up at the top end of the pipe, the gross and stinky wetness that has lurked around the edges of the dug out septic tank has turned emerald green, and is now drying out nicely, so that Plumber Man will soon be able to mortar the lid back into place, and bury the whole sorry business beneath a muddy mantle of forgetfulness. But the mystery of the whereabouts of the major part of the overflow remains. The soil around the tank, away from the puddles where a dug space remained, is not particularly damp. And yet we know that vast quantities of water have been pouring out of the top of the tank for at least the last two months. When the inspection tank emptied of its shroud of grey, we discovered that the sink and shower discharge straight into the chamber, and thence the drainage pipe, by-passing the septic tank entirely. But since the drainage pipe has been blocked, the water from the shower has been flowing back up into the tank through its outflow. Had we run any water through the shower on the day the septic tank was emptied, we might have noticed that it was coming in through the wrong orifice. Oh well.

So two-months-worth of shower and sink and toilet water, all coming out the top of the tank! The little puddles around the edges simply don’t account for it. Where has it all been going? Well here is my theory (which I’m sure Plumber Man will declare “Makes No Sense” as soon as he reads it).

The floor in our cellar is sold rock. There is a natural channel running through the middle of it, which over the course of the last year has, on occasion, looked a little damp, but not significantly so. However, over the last month or so there has been a steady flow of water through this channel, running from the side nearest to where the septic tank is buried just outside, to exit through the wall into whatever lies beneath the adjoining barn. Simon drew my attention to it a few weeks back, saying that he had discovered a natural spring in the cellar, which he assumed was related to the raising of the water table caused by the excess of rain with which we have been blessed of late. The stream is indeed clear and odour-free, and could of course be an innocent result of extreme weather.

But I can’t help thinking that all that overflowing septic tank water must have gone somewhere. And doing what water does, it will have most likely gone down. Down through the filtering thickness of the ground to the impermeable bed of rock upon which the house of this wise man was built. My theory is that the apparently natural spring in our cellar is in no small part the result of the overflowingness happening above, not many meters away. Not that it matters. The cellar does not smell, and its wetness is of no significant consequence. It’s just that I would like to know. And, since the ceasing of the excessive rain has coincided with the ceasing of the overflowing, I guess it will be some time before I can put my hypothesis to the test. (Though come to think of it, I suppose I could leave the hose-pipe running into the gap down the side of the uncovered tank and see where the water ends up…..but, nah, that would be taking the spirit of scientific curiosity too far.)

Having basked in the joy of free-flowing effluent for the last five days, I suppose we should soon turn our minds to creating a more respectable means of ultimate drainage. A stinky big soak-way trench just isn’t the thing, apparently. I am quite taken with the notion of creating a small reed bed – a wild-life habitat tinkling with dragon and damsel flies, and croaking with princes under spells. But since the arrangement will only be ‘temporary’ (until we bite the bullet, and install a proper, super-duper, current-norm-meeting fosse toutes eaux), Plumber Man feels that a few lengths of pipe-with-holes-in, over a bit of gravelly stuff, should do the trick. He has no heart.

This entry was posted in Life, Plumbing. Bookmark the permalink.