If someone asked me how many pets we have, I would not find it an easy question to answer. Dictionary definitions say that a pet is “an animal that is tamed or domesticated and kept as a companion or treated with fondness” or “an animal, a bird, etc. that you have at home for pleasure, rather than one that is kept for work or food”.

The cats, on the other hand, are very possibly the least pet-like of the animals that inhabit the Blanchetière domain. I could not say with confidence how many cats we ‘have’. For the most part we don’t have cats – they have us. And they have us for just as long as it suits them, and not a moment longer.

Most recently, until the Barn Cat appeared, I would have probably said we had five cats. But of those five, only the youngest three (Min, Blue and Brown) consistently spend some part of every day inside the house. Big Cat passes by most days, and occasionally calls in for a snack, or perhaps, on a rare day, a little sleep. Little Cat tends to turn up on the doorstep at night, just when any inside cats are being evicted. I suspect she comes to see the other cats rather than us. But just when you think she is lost to you forever, she will come inside, plonk herself on your lap, and demand (by nibbling your fingers) to be stroked.

Then Barn Cat appeared, and shortly afterwards her four kittens became apparent. And Barn Cat would greet us like companions and treat us with fondness. She enjoyed the pleasure of us stroking her (so long as we didn’t pick her up) but she also, very clearly, kept us mainly for food. She was clearly not a pet of ours, and yet the line between her behaviour and that of ‘our’ cats, was a very thin line indeed.

Over the last few weeks, we have taken great pleasure in watching the development of her kittens. They have lived upstairs in our barn and eaten the food we have given them. With the exception of the blackest black kitten, they have bounced about in our yard, and slumbered in the sun on the logs in our wood pile, and slept each night in our hay, all under the almost constant watchful eye of their mother. They have all been sneezily and snottily ill, and mostly recovered (although still suffering the red-eye after-effects of conjunctivitis). And gradually they have become bolder in their explorations and wanderings, but no bolder at all in their willingness to be touched by people.

The night before last, while we sat outside in the hot evening air, planning how to rearrange the old hay in the barn in preparation for the delivery of the new hay yesterday, the kittens were wildly skittering around and about, chasing each other in and out of the chicken house, across the wood shed roof, and out into the overgrown track behind the chicken pen. Barn Cat watched them closely, and listened to our conversation.

Then, when Simon and all of our animals were asleep, and our cats were long gone into their nightly far-and-wide, moth-and-mouse-chasing escapades in the fields, I heard a loud miaowing at the front door. I opened it to find Barn Cat standing there with her three bold kittens around her ankles. I stroked her, and watched her kittens drinking water from the big bowl on the doorstep, and wondered briefly if she was wanting to come into the house. I opened the door a little wider and she edged away, her kittens instantly vanishing beneath the leafy shelter of the overgrowth along the front of the house. I said goodnight, and closed the door.

Yesterday morning, Simon went out to the barn early to move the old bales of hay, and make ready for our new delivery. Only the blackest black kitten was to be seen – still lurking in the dark upstairs of the barn, from whence it has not moved since birth. A little later, I went out to clear a space behind the barn doors, and found Barn Cat standing at the bottom of the stairs with a huge mouse in her mouth, calling to little Black, who paced up and down along the edge of the upper barn floor, miaowing pathetically. There was no sign at all of any of the other three kittens.

Barn Cat refused to take the mouse up to the kitten, and seemed instead to be trying her hardest to entice her recalcitrant child out of the high, safe dark, into the big bright world waiting to be explored outside. But the kitten would not come down. It looked over the edge, miaowing. It stood on the top step, miaowing. It stretched out one tentative paw, and pulled it back. It put one paw on the second step, and again pulled back. It wanted to come down to its mother and the tasty mouse. But, for some unknown reason, it simply couldn’t do it. Thinking that my presence might be making things worse, I went away and left Barn Cat to deal with her offspring as best she could.

A little later, when Florian arrived with this year’s hay, and we commenced the gruelling, sweaty, spiky task of unloading the bales from the truck, and carrying them one by prickly-heavy one to the upper barn floor, Barn Cat had vanished. Only little Black remained, skulking fearfully in the shadows, as its home was invaded and rearranged, and slowly filled with pillars and walls of gold. 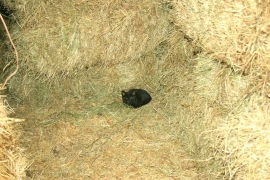 Today there is still no sign of the Bold Three, nor of their mother. Little Black is still here, all alone, curled in amongst the fresh new hay, occasionally lifting its sad little snotty head to wail a long and plaintive miaow into the lonely, empty silence.

And I have begun the slow process of adoption, which starts with my sitting nearby on the top step of the barn, while Little Black eats nervously from a dish next to my ever-slightly-closer hand, and culminates, hopefully, in there being six cats who snooze on our sofas, and allow us to adore them, and who call us their own. 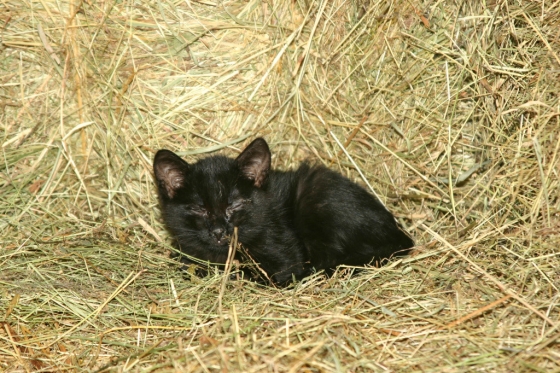 This entry was posted in Cats, Chickens. Bookmark the permalink.