Who will rid me of this turbulent beast?

You may have noticed that Simon’s last post was entitled ‘Back to Normal?” The question mark is significant. Certainly, the cat situation feels more normal now that Mother Cat has returned from her wanderings. Six cats is still a good house-full, when they are all in at once, and they do a good furry, purry job of banishing the sense of emptiness left by the loss of Stripe and Tom. But, five days after the landing of Turbulent Lenny, the llama situation remains very far from ‘normal’ indeed.

Last Wednesday morning, before Simon hot-footed and sore-legged it to the hospital in Moulins, our friend, Fearless Mike, came over to assist in releasing Lenny from his overnight horse-box hotel into the relative freedom of the ladies’ field. He was still attached to the tether that we believe he has been on pretty much all the time at his erstwhile abode, and he was rather bouncy as Mike led him out of the trailer into the field, and struggled to detach the rope from the big metal ring on his neck collar.

But within not many minutes, Mike had managed to set Lenny loose and get himself out of the field and behind the firmly closed gate, without getting bitten or barged or trampled. And we watched as Lenny set about exploring his new environment, darting about like a sugar-deprived child let loose in a sweet shop – until he spied the other llamas! He stopped suddenly – back straight, ears forward – the implications of the glorious sight before him gradually registering in his travel-addled brain.

The moment of truth had arrived. We needed to let the girls out from their little pen at the top of the main field, in front of the barn, and see what Lenny, after a year of solitude and celibacy, would make of things.

It didn’t take him many seconds to decide. He headed for the gaggle of girlies at full pelt, head down, tail up, and within a few minutes had singled out Elif as the woman of his momentary dreams. The girls scattered and ran – Elif playing hard to get as usual, but not too hard, so that a few minutes later he was upon her from behind and trying with all his lusty llama might to get her to the ground.

Now Lenny, who is around five years old, and in his sexual prime, is Not a Big Llama. He is somewhat surprisingly only about the same size as Lilas, who is a only a girl, and only 17 months old. But he is quick and strong, with a very manly-looking set of testicles. He is indeed a ballsy llama with a bit of a Napoleon Complex. And he was not at all daunted by Elif’s superior height and girth, and her unwelcoming glare. He hung on, and on, and on, until eventually her knees buckled under their combined weight, and she went down. 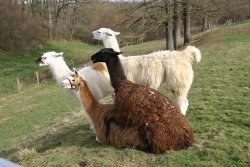 While he was heartily engaged in demonstrating his raison d’etre, we also released Duc and Valentine from their distant observers’ enclosure, so they could get a ring-side view of the action, figuring that Lenny would be too distracted by the task in hand to immediately rush to the attack.

He has discovered the dubious delights of electric fencing, and, much to our relief, has not breached any of the boundaries in his attempts to establish his unchallenged position as The Man. But he has frightened the crap out of Elif, Capucine and Lilas, and out of me, by his insane and incessant full speed chasing after all real and imaginary threats, and by his relentless uttering of ear-drum assailing alarm calls, so that we all keep a safe distance from him, and try really, really hard not to inadvertently make any eye contact with him, in case it provokes a barrage of spit, and violent, manly posturing.

And having suddenly found himself in a new and wonderful universe with three – count them…THREE – potential mates, he is not about to let anything or anyone come between him and his women. 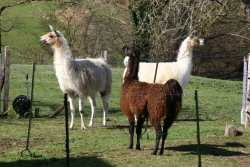 Which means that he won’t let them come up to the catch pen to get food, and he won’t let them come to me at the gate or fence, when I try to put hay in their field. And it means that whenever I walk around the land with the dogs or with hay and water, he will charge across the land from his usual guarding post along the boundary with Duc and Valentine’s field, to intimidate me with his shrieking and his stomach regurgitations, and will then set about chasing his women into a cowering frenzy, just to make it absolutely clear to them that they must not so much as even look longingly in my direction.

I don’t know how long he can keep this up. I have never seen an animal so continuously tense; so highly strung. He runs everywhere. He never stops to graze – he just grabs the odd mouthful of hay or grass or twig, and then runs threateningly at something, with his dinner trailing from his panting mouth. He is confused. He is bonkers. He is surely destined for a heart attack any day now. And I am sorry to say that, at the moment, I would experience nothing but relief at his premature demise.

But, it is still early days. Poor Turbulent Lenny has spent more than a year alone and tethered on a secluded Provence hillside, with only rare, and not-particularly willing human interaction with his previous owners’ caretaker, who was responsible for him while the owners were away most of the time, and who, by his own admission, was quite scared of him. And then, after a traumatic twenty four hours in an unfamiliar horse box, he arrived in a completely new world, surrounded by unknown llamas, and dogs, and pigs and people. And it has blown his already unsound mind.

So, I will persist with the same old, same old, in the hope that he will succumb to the sedative effects of routine, and will begin to realise that not everything that moves is a threat, and that actually, some (two-legged) things that move have his best interests at heart. I will keep talking soothingly to him as I pass by, and keep offering him food in the face of his violent green responses. I will keep being in the same place , at the same time, doing the same thing, until he learns to know what is going to happen and learns not to over-react.

And in the meantime, the poo will accumulate once again in the field that has become a no-go zone for wee timorous beasties such as myself, who have suddenly found a cure for their OCDs. And the tangles will accumulate in the fur of the lady llamas who I can no longer approach for an affectionate stroke and a bit of a grooming. And I will keep trying to sneak bits of concentrate to the ladies while Lenny is distracted by the imaginary threat from Duc and Valentine at the other end of the field, in the hope that they don’t think I have deserted them to die hungry, lonely deaths at the hands of their Suitor from Hell.

And I will hope and pray that Things truly do get Back to Normal some time soon.

1 Response to Who will rid me of this turbulent beast?