It’s funny how my memory handles the weather. Normally, I rapidly forget yesterday’s hot/cold/wet/wind as I experience the weather of the day. I think this tendency has increased since we moved here and I spend so much more time out of doors. The weather has a real impact on my life, but it’s only the weather now that matters.

If there’s snow on the ground I tend not to walk far with llamas, as they can’t find the reward of nice fresh plants to eat. If it’s very windy, I walk them only briefly, as the constant noise and sudden movements make them skittish. In really hot weather, we have to make sure the chickens can get shade and water — some days we even erected a parasol for them in the afternoons when the sun was beating relentlessly on our south-facing garden. When it’s icy, we have to make sure that all the animals have unfrozen water to drink.

Since November, however, one aspect of the weather has had an enduring impact: the rain. In November there were 22 days with rain. Another 19 in December and 14 in January. Val commented last month on the impact of repeated soakings on her state of mind. Unfortunately, January concluded with a rainy spell that ran through to the middle of February. As a result, there have been springs in places where water has never been seen. Banks seep water from multiple points. Those mysterious gulleys and cracks are now revealed as the routes of bubbling streams. What appeared to be animal tracks now expose their true origin as trickling escape routes for the continual excess of rainwater. Pond weed is thriving in running water across the middle of tracks.

On the llama fields, the wetness is causing muddy misery. At the bottom of the rough land, the catch pen, where we feed, groom and prepare llamas for walking has become a sticky, slidy, mudbath. A stream runs across the entrance. The straw, which we optimistically put down to provide a drier floor, has turned to sludge. 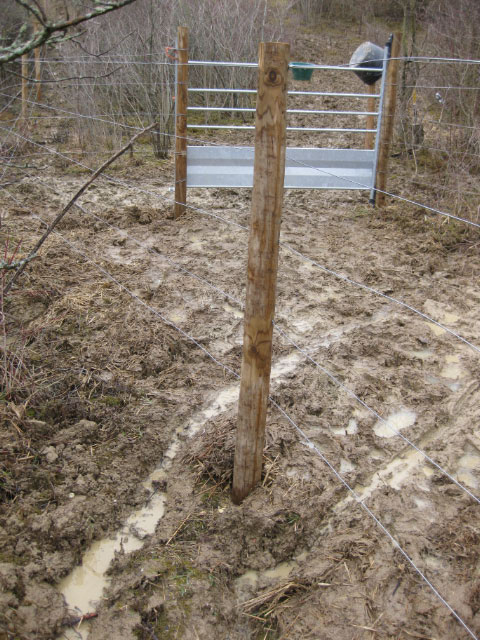 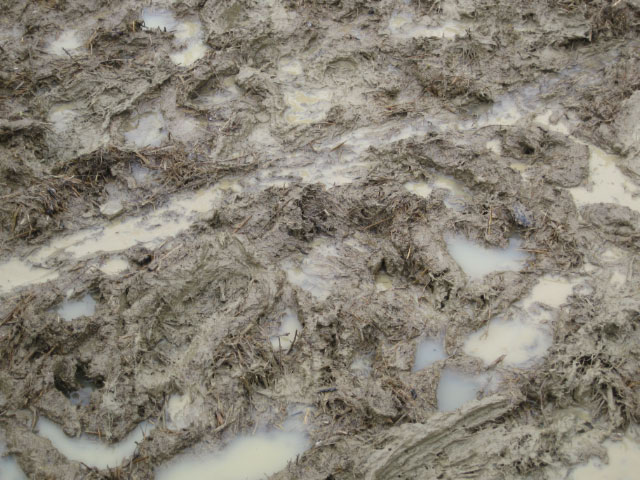 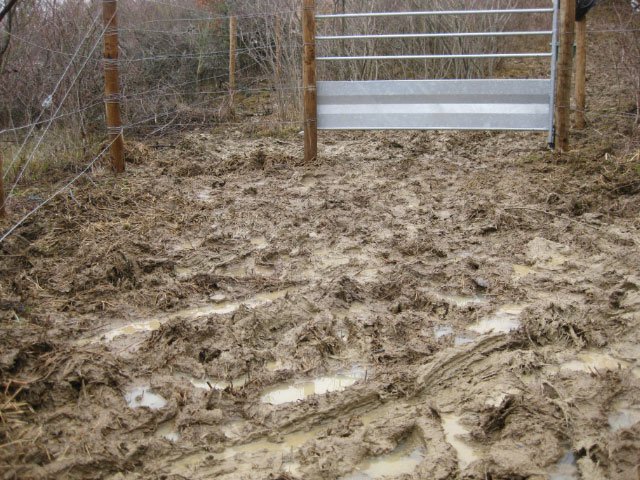 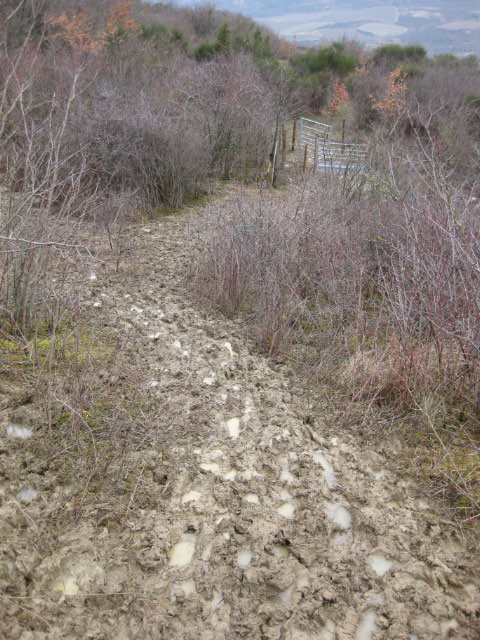 I have begun to feel as though the wetness is permanent. Even if a particular morning is bright and sunny, I know that the route to the rough land will involve heavy booted crossing of the mudfield around the vineyard. I shall have to carry hay and water laboriously to the walking llamas, as not even the Land Rover can get up the clay stream that used to be a track between the vineyards. My boots will be covered in a thick layer of clay, and my jeans splattered to the waist. The llamas are a sorry looking, bedraggled set of animals, and I spend many hours repeatedly combing clods of mud out of their tangled hair.

But . . . . this last week, I have begun to wonder if the damp, dismal gloom is lifting. We’ve had seven consecutive days with no rain. The humidity has dropped below 70% for the first time in ages. The sun and the wind have been working together and a dry crust is beginning to form around the edge of the vineyards. Although streams are still running where we’ve never seen water before, perhaps there is light at the end of the watery tunnel!

In the last few days, I’ve walked much further than for many weeks. The llamas have grazed on new verges, happily eating the early shoots of what we hope will be Spring. I’ve stood in the sunshine, cheerfully contemplating a llama almost overwhelmed by the choice of food. Instead of trudging to and fro, I walk easily along firm tracks.

I haven’t yet come to believe that the weather could be getting back to ‘normal’. I have to struggle to remember that over the seven years we’ve been coming to Roquetaillade, it’s never been wet like this before. Perhaps we shall manage to have a month or two of light-hearted (and light-footed) enjoyment of the wonderful countryside before we leave for the Allier? I hope so, and I’m pretty sure the llamas share this view!

This entry was posted in Environment, Llamas and tagged picture. Bookmark the permalink.