Val is in England, with the intention of being there for the arrival of her first granddaughter. Lily does the job well, and Jennifer Daisy is born on Monday in the presence of her soon-to-be-doting grandmother. As Val was due to come back to France on Tuesday, her journey is postponed to allow more time for daughter support and granddaughter bonding.

Which leaves me contentedly enjoying the solitude. And without internet or telephone, this really is solitude. Plenty of time to contemplate the environment and interact with the animals. The chickens are very well settled, and have established their new routines. Max is loving the new house, with the freedom its surroundings offer him. And the cats seem to have adjusted to new ownership. Two of them – nameless except for descriptors “Big” and “Little” – come in and out of the house with a relaxed propietorial air. The other cat, as yet completely nameless and in danger of becoming known as “Other Cat”, seems much more wary. She seems to be spending a lot of time in the barn, and I’ve decided that she must prefer it to the house.

Hang on! What’s she got in her mouth? Has she caught a mouse? Closer inspection shows that she is, in fact, walking around carrying a kitten. Where the hell did that come from? No, that’s obvious . . .  The real question has to be “Are there any more?” Don’t cats have kittens in large numbers? Time to explore the barn, I think!

I have yet to explore the whole of the upper floor of the barn. It contains loads of old hay, both in bales and spread across the floor. This means that you can’t actually see the floor, which gives a false sense of security, as looking up from the ground floor shows that large areas of the upper floor are made of twigs laid between the beams. Ignoring the possibility that I might tumble through in a dramatic chute of loose hay, I set off with my super-power torch in search of abandoned babies.

Now I know why the third cat has been spending so much time in the barn. At the far end, in a neat little nest between a bale and the barn wall, is a bundle of fur, which on closer inspection turns out to be two kittens. The mother has followed me and settles down in the nest with her three babies. 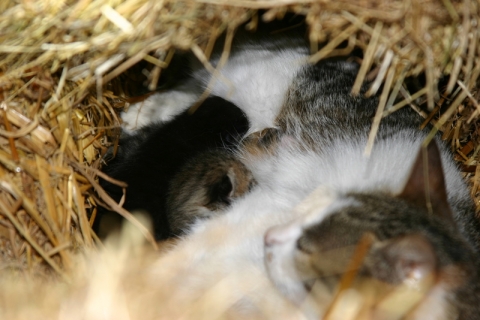 Oh well, at least we have a name for the third cat. Henceforth she will be called Mother Cat . . . .

I make sure that there is food and water for Mother Cat, and check the nest frequently through the rest of the day. All seems to be well, and I leave them for the night confident that they are safe.

I went off to sleep very rapidly, but did not sleep well. Several times I thought I could hear the kittens, but thought this must have been a dream, as the wall to the barn is very thick. Suddenly, at about three o’clock, I realised that I actually could hear something. Light on, and search the room . . . . . I’m astonished to find I’ve been sharing the bed with a kitten! Val has two pillows on her side of the bed, and carefully hidden between them is a stripey bundle of mewing fur. So that’s what Mother Cat was doing walking around with a kitten in her mouth! Only I hadn’t realised that she had already transported one kitten, and I had found her with the second.

As I enter the barn, in dressing gown and wellies, carrying the noisy little bundle, Mother Cat greets me anxiously. I put the kitten into the nest, and she takes over for a clean and feed.

The next morning, Mother Cat sneaks past me into the bedroom. She’s straight on to the bed and looking under Val’s top pillow. I guess she remembers putting a kitten there, and is not sure that it’s the same one that she got back in the night. I’m sure she thinks I’ve taken one of her babies – and she comes back to check several times during the day. I can’t decide if this is clever of her, or really stupid?

This entry was posted in Cats, Life and tagged picture. Bookmark the permalink.