Every Life Should Have Nine Cats

Eight cats is a lot of cats. I guess that’s what you get when you wish a little too hard.

When we lived in Roquetaillade (with only seven llamas, four chickens and one dog) I really, really, really wanted a cat. My sister, who lives not far from our old house, had one. Then she found a wild, hungry kitten lurking in the workings of their tractor, which became house-cat number two. And I was greenly envious, and wished that the Universe would send me a random cat as well.

Well it did. It bundled up all my wishes into one parcel and delivered them along with our new house in the Allier, which came gift-wrapped in the shiny possibility of animals galore. And now we find ourselves with eight cats, five of which are just about reaching that expensive age of teen-hood, where they need to be neutered, before five becomes twenty, becomes a hundred, ad infinitum. Yes, even I am forced to admit that eight cats is enough.

What is surprising though is just how thoroughly they have insinuated themselves into our life. During one of those bloody-hell-I’m-sick-of-all-these-animals moments that occur very occasionally, when the brain chemicals are playing up, and the sheer volume of crap and animal-induced aggravation gets on top of me, I started to consider the possibility of giving some away. But then Simon and I went through the list, comparing notes about which were our ‘favourite’ animals, and which ones we would be less-than-sorry to see go. And of course it transpired that they were all our favourites, and neither of us could bear to part with any of them. They are all such individuals. Some are less affectionate, or less attractive, or less competent than others, but they all have some quality or other that makes them special.

Of the three cats that we inherited with the house, only Big Cat and Mother Cat remain. The original Little Cat disappeared about a month after she had been spayed (sorry, but I have to say it…..bloody waste of money!). Both Big Cat and Mother Cat were pregnant, but we managed to get Big Cat spayed before she had her kittens. Mother Cat however was uncatchable, and went on to have two litters of trouble before we finally managed to put an end to her rampant procreative powers. Only one of the first litter survived, and she became known as Little Cat the Second – partly because she was, not surprisingly, little, but also because she looked very much like Little Cat the First. She has also been spayed, and is, also not surprisingly, no longer little.

And then there are the Five Kittens – Mother Cat’s final contribution to the burgeoning world of cat-hood in the local area.

Biggest and daftest of The Five is Tom, 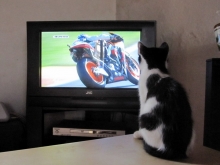 so unoriginally named because he is the only male cat in the bunch. Tom with his funny face and weepy eyes (that, being a slob, he never bothers to clean). Big Tom, who is unafraid of anything and made from something very tough indeed. Which is handy, because he is also Clumsy Tom who routinely falls from high places and runs into walls. Tom is already bigger than his Mother. Tom thinks he is a dog. When he is not bullying his little sisters (which is quite a lot of the time), he likes to sprawl untidily in inconvenient places, or hang around on street corners with the Big Boys, practising his kick-boxing. 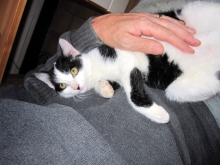 This was a monicker assigned in the early days to distinguish her from her similarly coloured black-and-white brother Tom (who was actually first christened Spade-head by me, but Simon didn’t like that name – I can’t think why). She has all the attractive physical attributes of her brother without the down-sides. She is very fluffy and furry and soft, and unbelievably cuddly. She cleans herself meticulously. She follows you around and leaps deftly and unnoticed into your lap, to stare adoringly into your eyes. She is the guardian of the kindling wood. The only time when Stubbs is not surreptitiously stealing pieces of wood from the bucket to chew into a hundred vacuum-cleaner-hose-blocking chunks, is when Stripe is sleeping in it.

Then there are the Two Tabbies. Virtually identical tiger twins, impossible to tell apart at a quick glance. They are named Blue and Brown. When they were very little, Brown had orange tinges to the edges of her fur, and Blue, by comparison, was grey. But as they matured, Blue also, and very inconsiderately, became more brown. Now they are really only distinguishable by a slight difference in the lines on their faces, and by their behaviour. 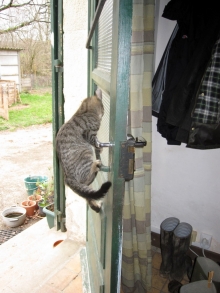 is the undisputed queen of door-opening. Blue can do it too, but with less finesse. Brown is so good at opening the front door that we have to lock it at all times to stop her letting herself and the other cats (and sometimes the chickens) into the house, and letting the ever-ready puppies out. Brown is so good at it, that the other cats queue up at the door and ask her to open it for them, which she will do, even if she doesn’t want to come in herself. 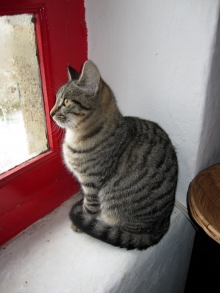 Blue is simply the prettiest and most adorable archetypal tabby cat. She likes to stand on your feet and push her face into yours when she climbs on to you from wherever she happens to be nearby (a desk, a tree, a ladder). She just can’t seem to get close enough. She is utterly and classically beautiful in looks and temperament. But she never smiles.

And last but not least (although actually, yes, least) is Min. Min is a miniature version of her mum. She is the Minimum Cat. She is the Miniscule Cat. She is tiny, and frail and so much smaller than her siblings that it is hard to believe that she continues to survive. 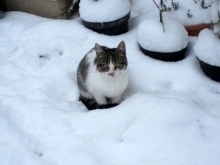 She is tiny but she is tough and she walks confidently into the open jaws of drooling puppies without fear or hesitation, and regularly frightens Poor Old Max off his comfy bed so she can lie, diminutive and unyielding, in the very middle of it. Like Rufus, she has ADHD and can’t sit still on your lap for more than sixty seconds. One-Minute Cat. This ceaseless activity might be one of the reasons why she looks like such a neglected waif. Her purr is bigger than her person and she climbs trees like a squirrel on amphetamines. She is adept at finding key-board short-cuts to search functions on the lap top, and will only relax when she is being held very tightly. She may also have Autism.

Little Cat can’t decide whether to be 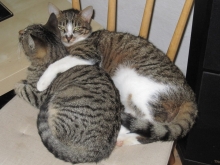 one of the grown-ups or one of the kittens. She takes her turn at both, and doesn’t belong in either camp. She is often Out when the others are In. She lurks in the mist like the lonely ghost of Little Cat Past, and slips constantly in and out of the door like a restless spirit in search of peace. She mothers the too-big-for-mothering kittens, and waits in vain for her mother to mother her. She seeks comfort but doesn’t stay for it. She wanders the moonlit lanes in her long white socks, chasing leaves, and mice and happiness. 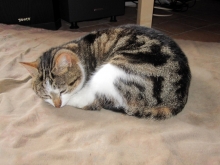 is gorgeously solid, strong and independent. Her face is full of foreboding, and she intimidates all other creatures with her presence and her quick paws. She is our Witch’s Familiar. She watches Everything. She says Nothing. She knows All. She appears out of the blue wherever you might be, and demands to be carried back to the house on your shoulder, like a scowling parrot in a fur trench coat. She is The Cat of High Self-Esteem, and no one messes with her.

And then there is Mother Cat. Plain, 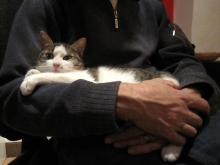 homely Mother. Long-suffering, world-weary Mo. A small, slightly bent-backed animal with all the kerb-appeal of a pre-war, pebble-dashed council house. If you were choosing a cat from which to breed, Mother Cat would not be the obvious choice. But, despite appearances, she is tough and tenacious, fecund and nurturing, and she has given birth to a veritable slew of feline enchantment. And because she was so standoffish, so unapproachable for such a long time, her recent metamorphosis into House Cat Extraordinaire makes us feel honoured by her presence.

She is apart from the crowd. At feeding time, she will sit patiently on her imaginary velvet cushion of disdain, and wait until all the other cats have finished pushing and shoving and gobbling their fill, before daintily cleaning up the remnants, all alone, like a solitary princess in a silver service restaurant. And at night-time chucking-out o’clock, she will invisibly vacate her prime sleeping-beauty position on the sofa between me and Simon, five minutes before anyone else has even thought about moving, to slip silently into her four-poster bed on top of the wardrobe, behind the scrabble-and-monopoly curtains, in a daily attempt to foil our routine cat eviction plans. She is the Mother of Invention. The Mother of All Cats. She is the Queen Mother.

These Eight Cats are not our pets. They simply share our living space and our lives. They watch birds and they watch TV. They climb trees and they climb curtains. They sleep on rocks and they sleep on cushions. They kill rodents and they kill time. As W L George once said, “Cats know how to obtain food without labor, shelter without confinement and love without penalties.”

Or, as Rudyard Kipling put it, in the “Just-So Stories”….

Cat said, ‘I am not a friend, and I am not a Servant. I am the Cat who walks by himself, and I wish to come into your Cave. 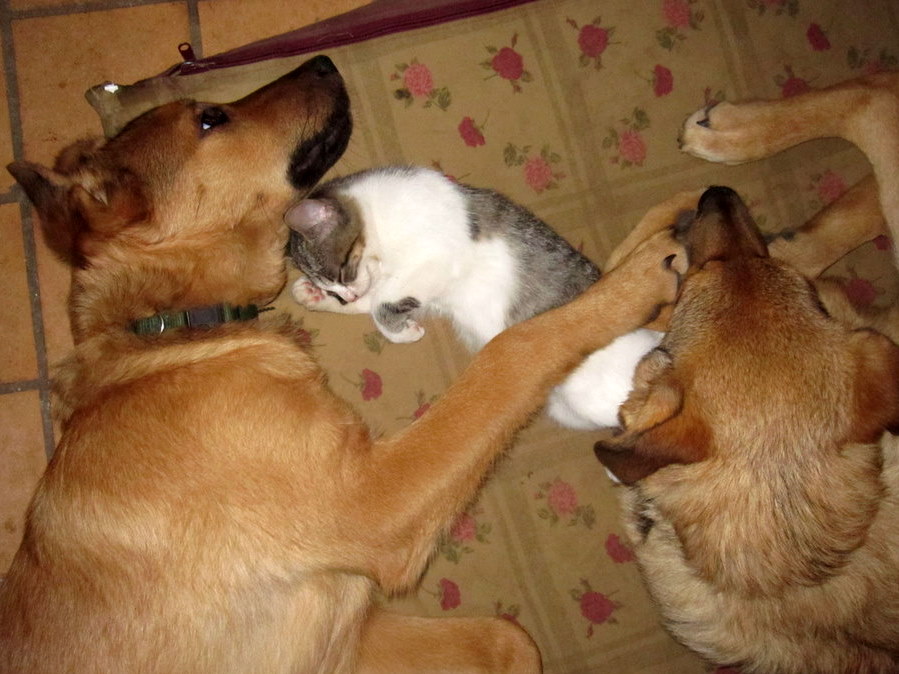 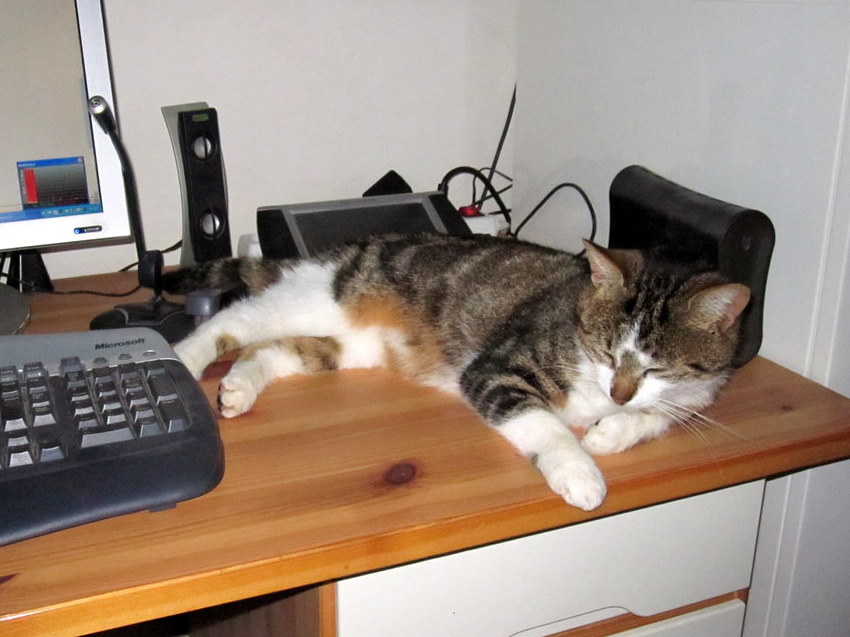 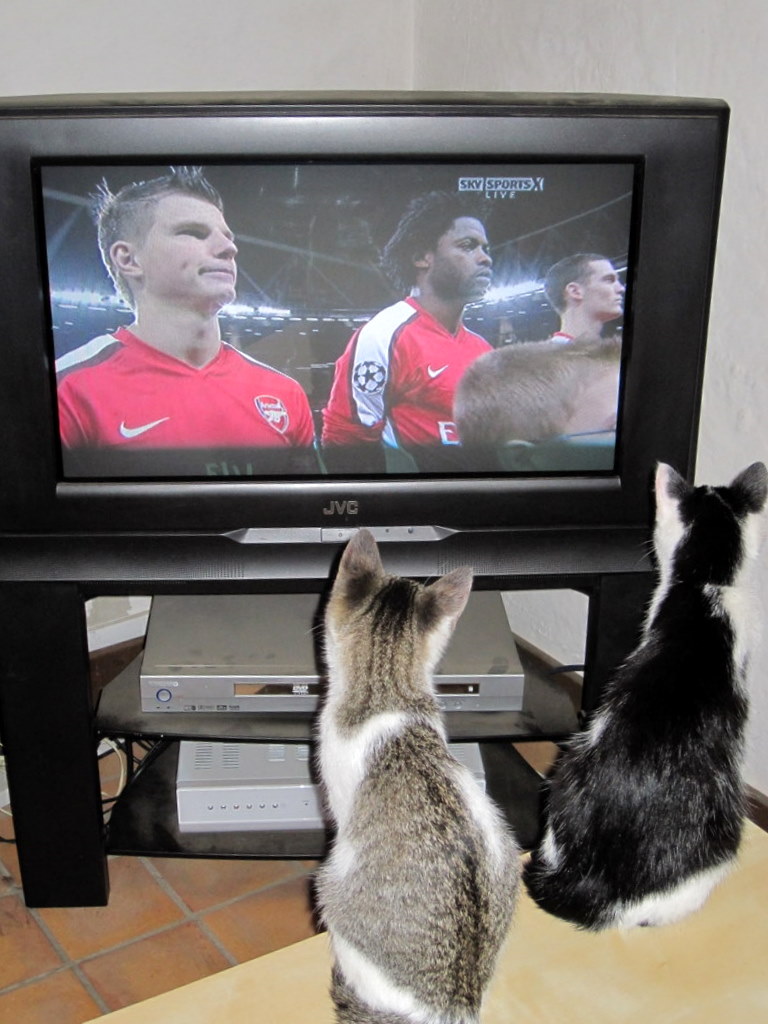 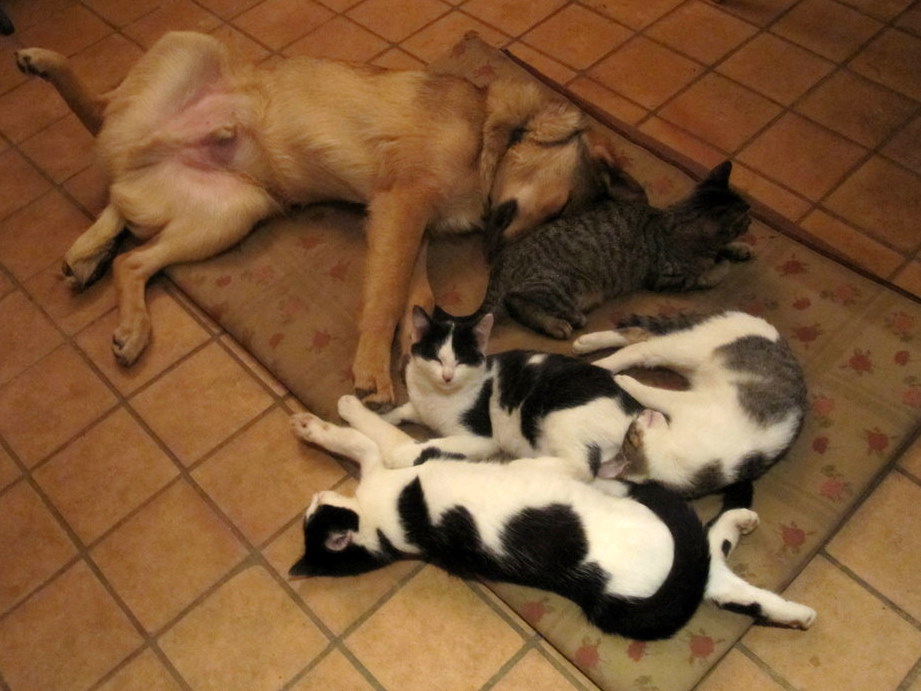 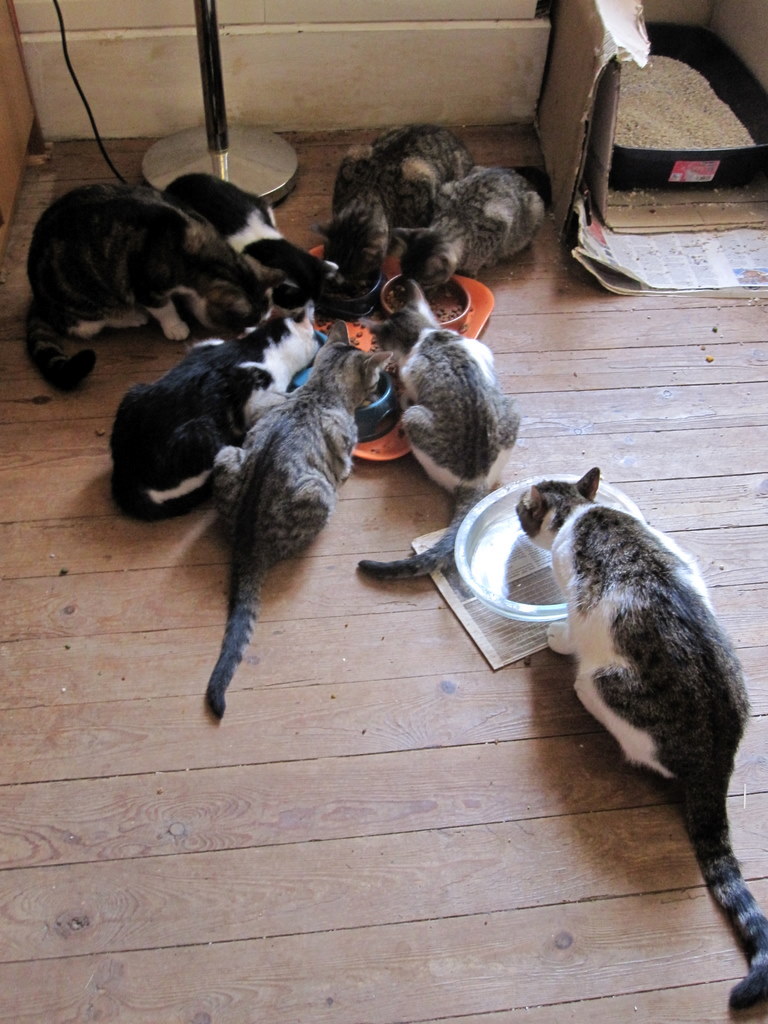 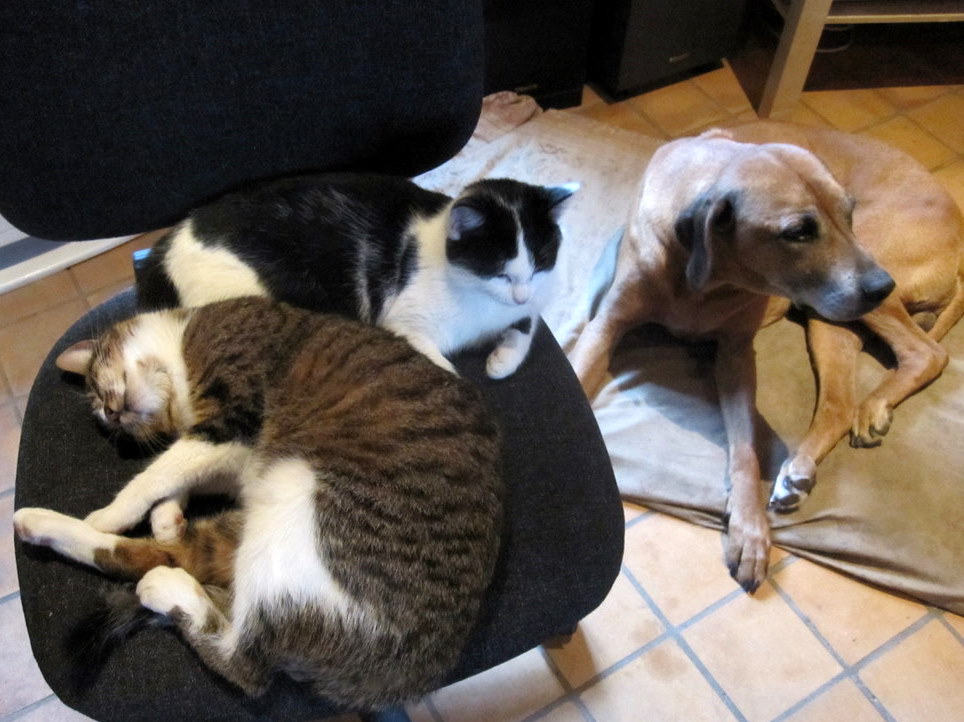 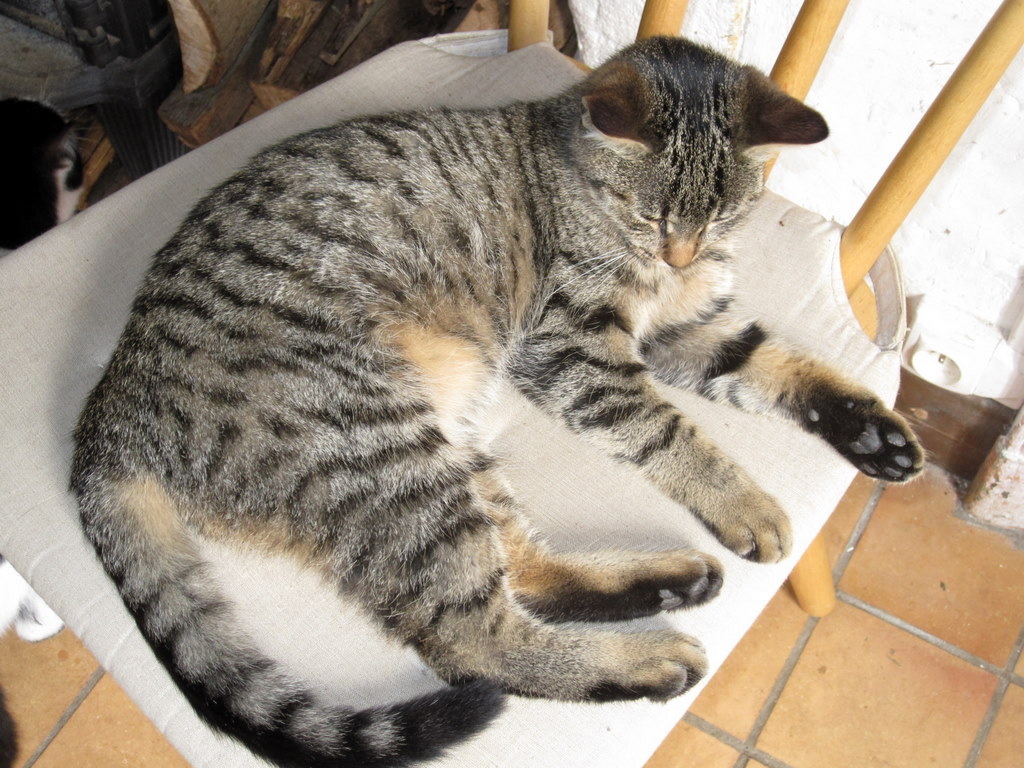 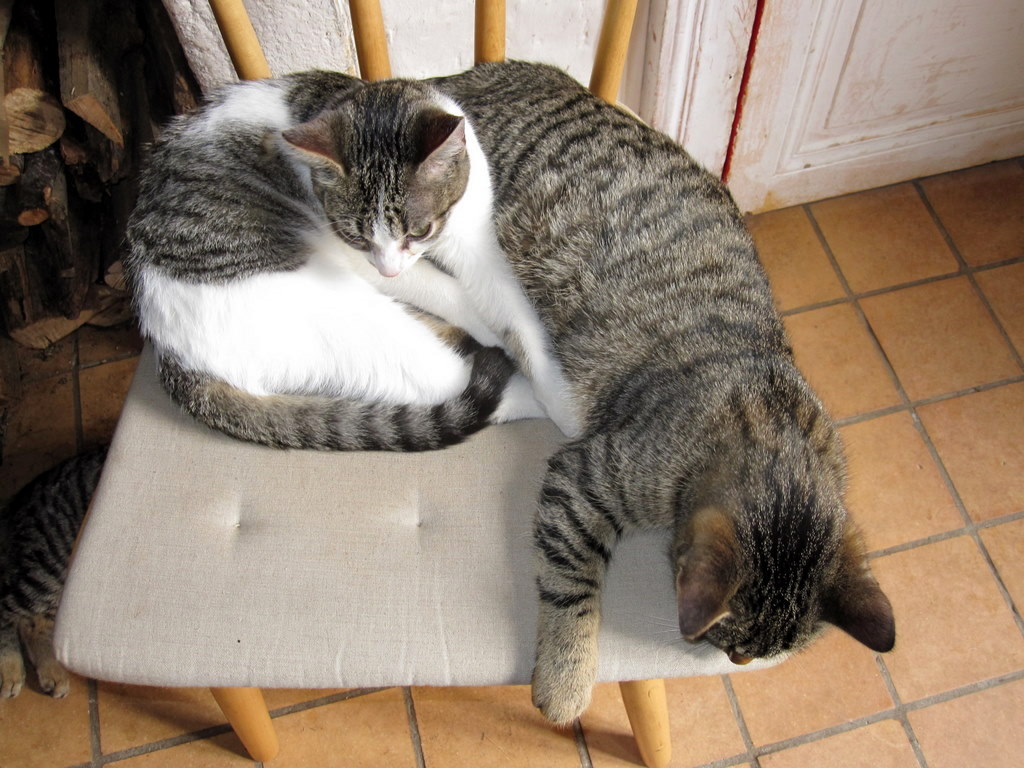 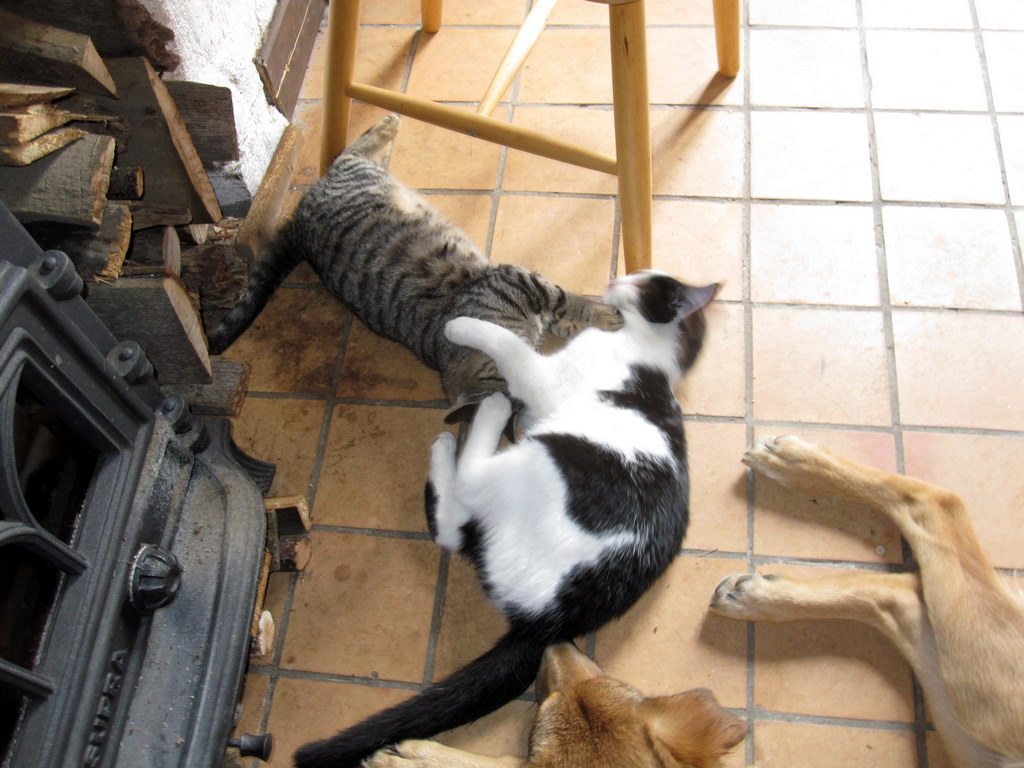 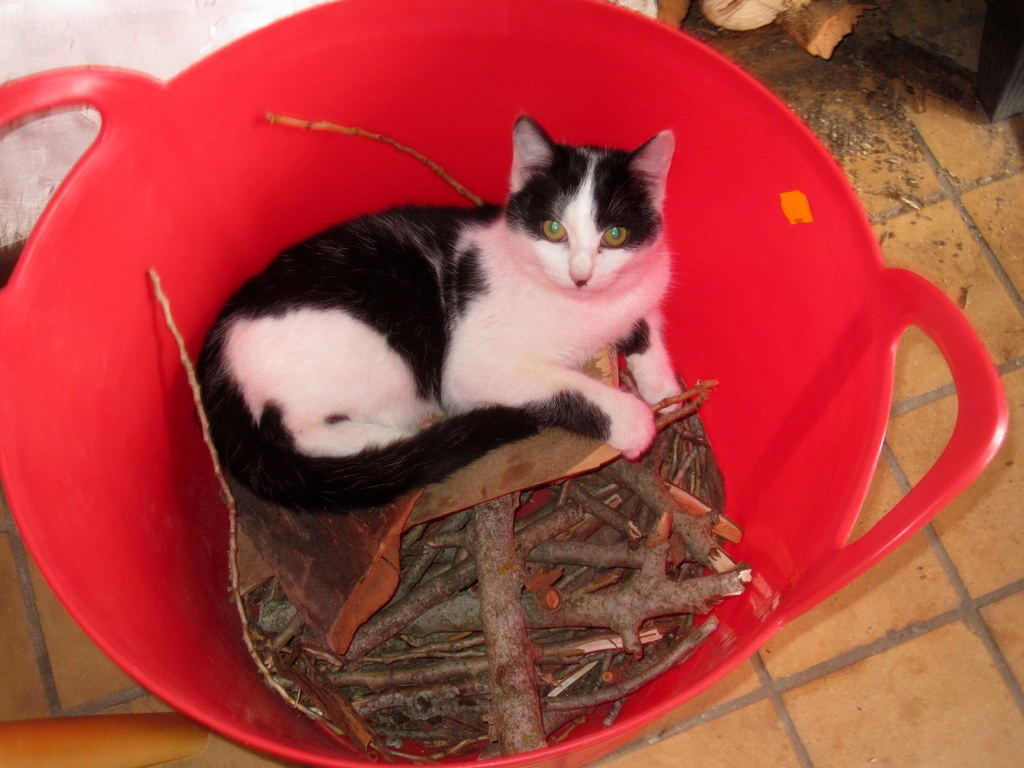 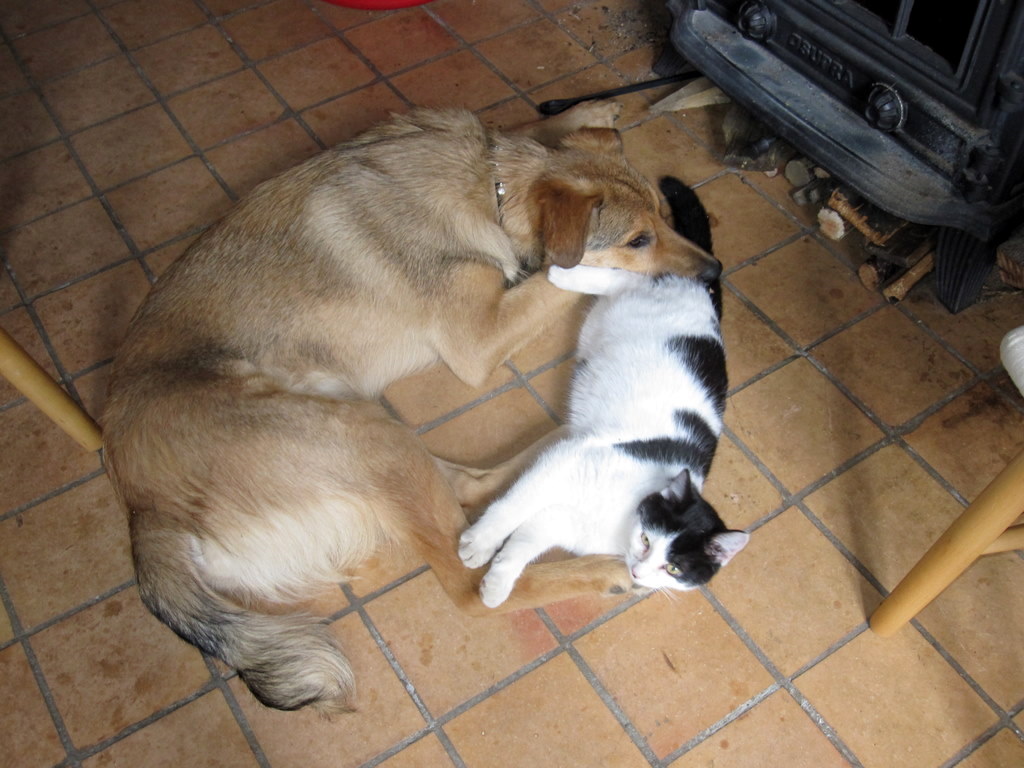 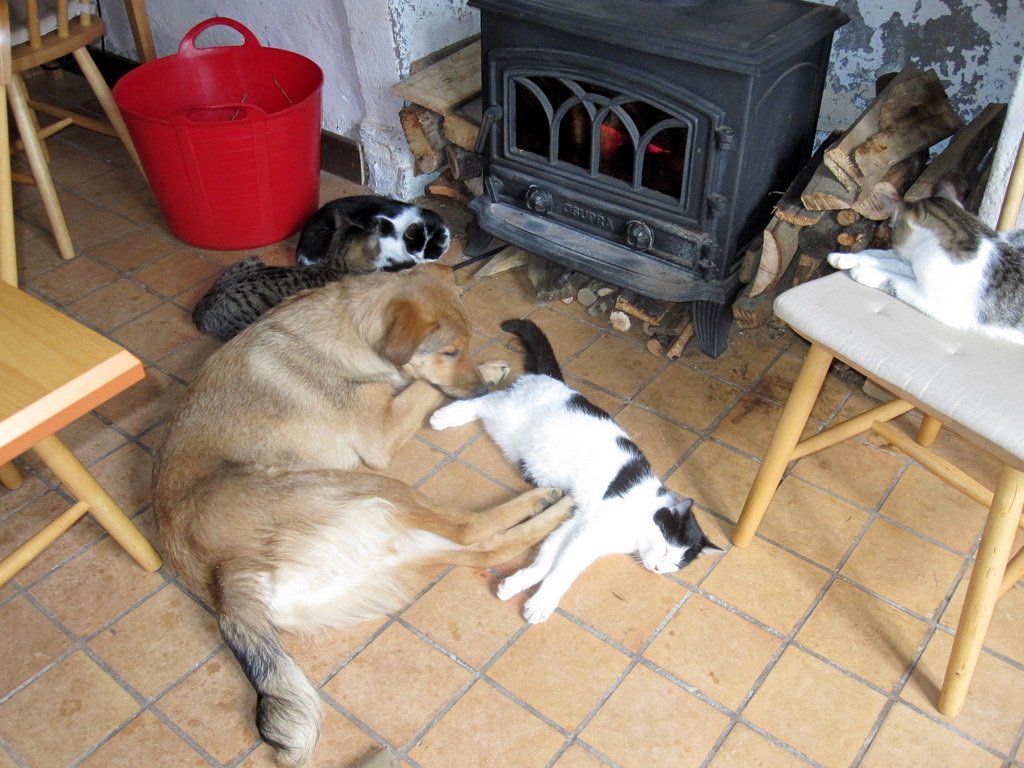 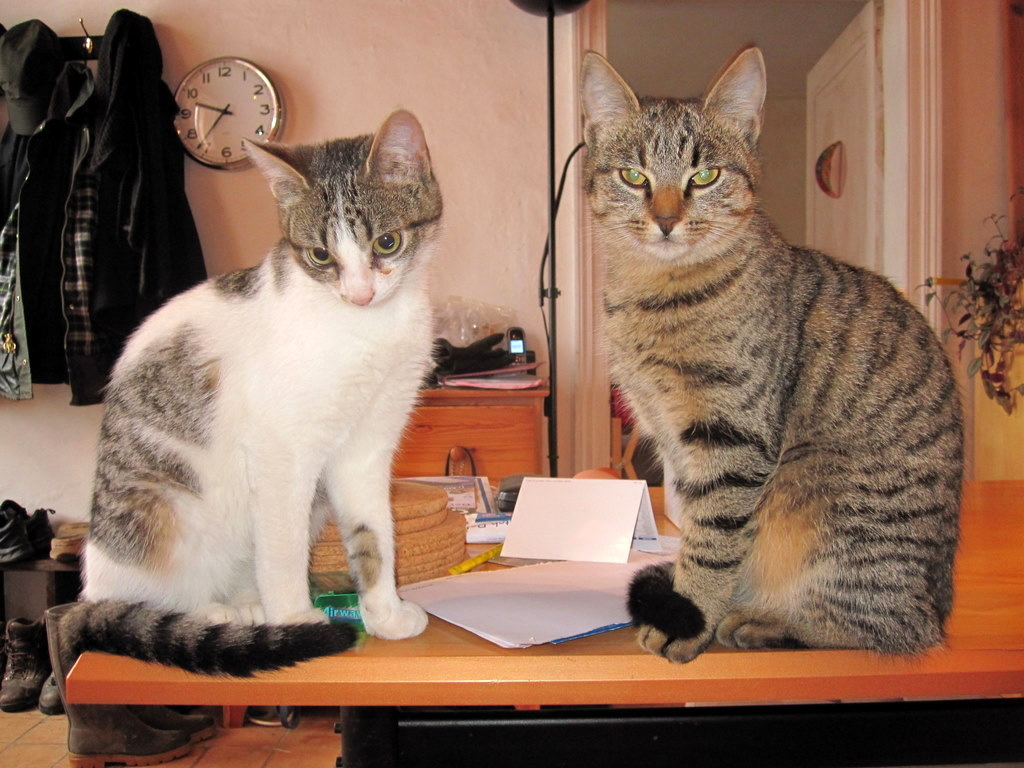 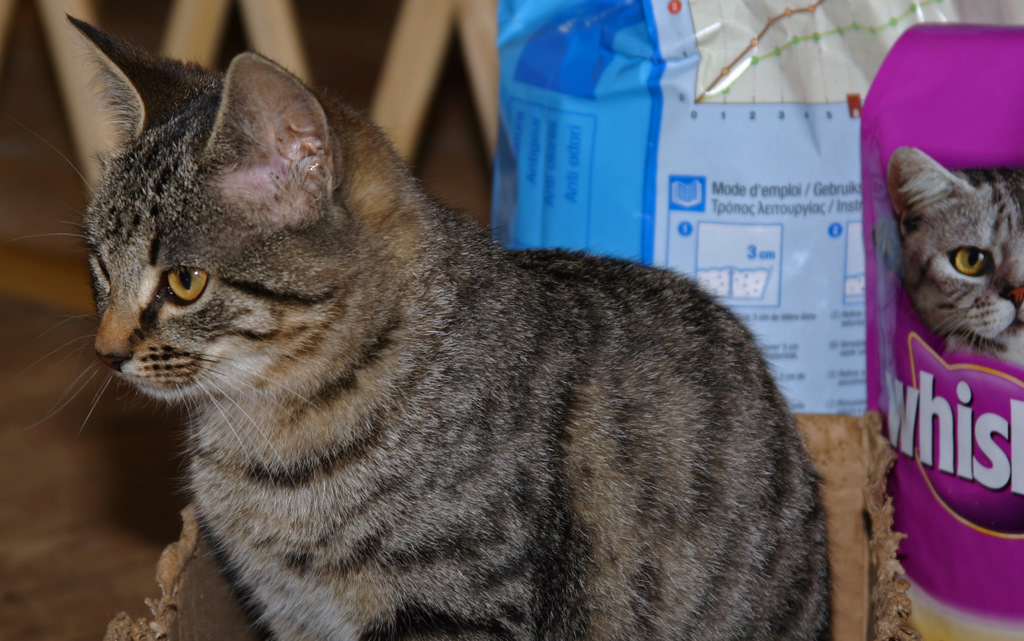 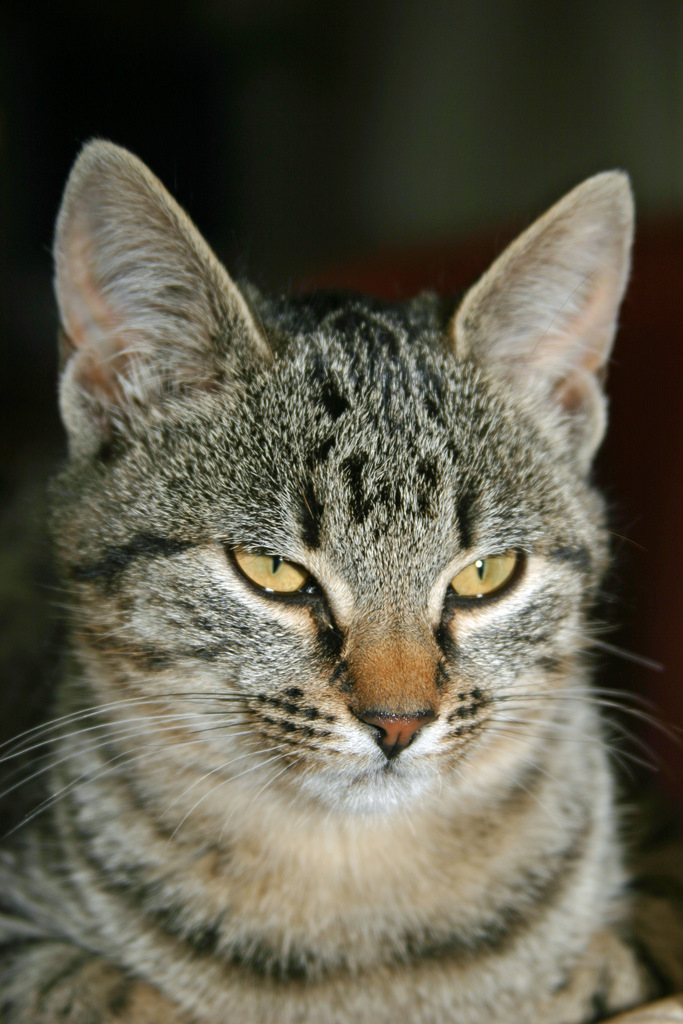 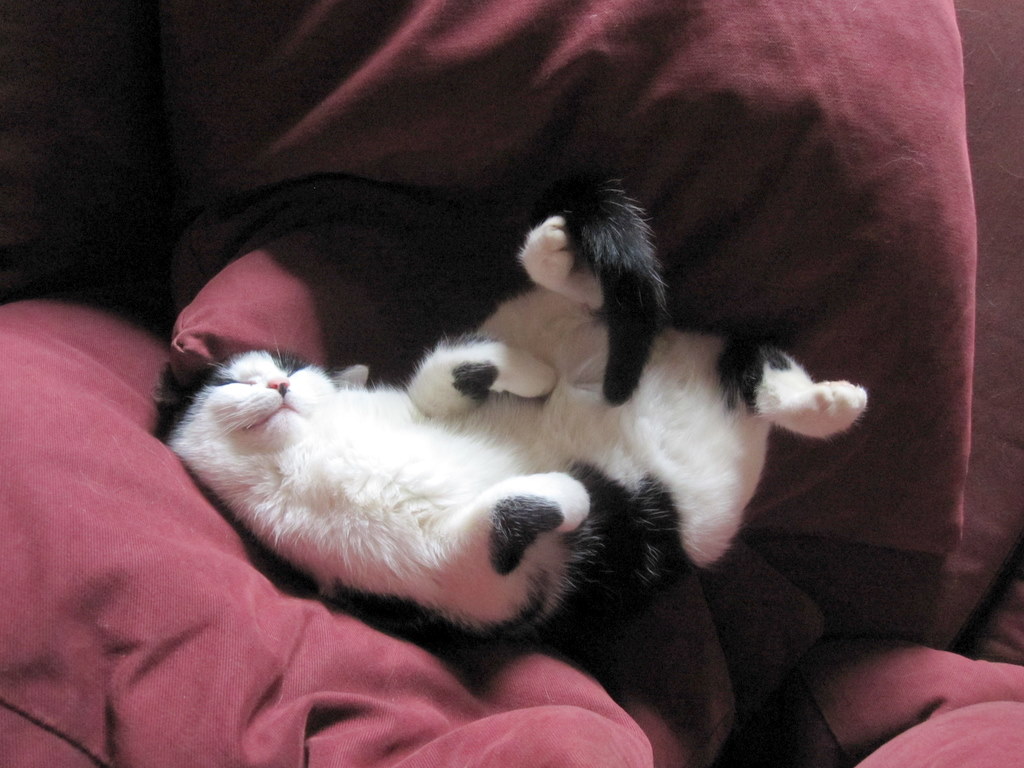 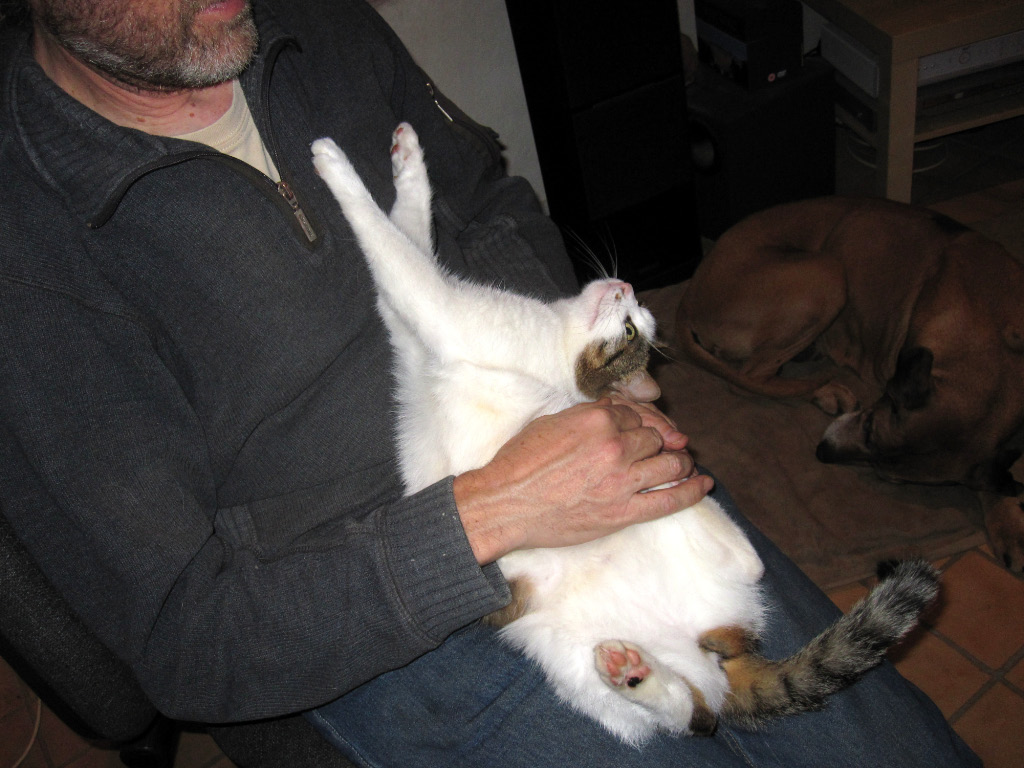 This entry was posted in Cats and tagged picture. Bookmark the permalink.