This is the story of the continuing evolution of Plumber Man into Excavator Man.

Armed only with my trusty Takeuchi, and aided by my faithful surveyor/photographer/supervisor, I have transformed the far end of the vegetable garden. What was recently a sewage outflow pit is now the far more elegant-sounding “lit d’épandage”. Now literally translated this means a ‘spreading bed’. Of course, what it means is that the sewage outflow is spread under the covers of a bed of earth. Which may not sound terribly attractive, but ask yourself, where does your sewage go? At least ours is now filtered through very large distances of sandy soil before it reaches the stream . . . . .

To achieve this oh-so-desirable outcome required my first attempt at precision trench digging. I had decided that I should attempt to make our system close enough to the modern French “normes” (standards) to pass an official inspection by the charmingly named SPANC (Service Public d’Assainissement Non Collectif). If routine inspections in this area ever get going, as they are supposed to do before 2012, my lowly aim was that we should be awarded the standard of “non conforme, mais non polluant” (non-compliant, but not polluting). From the beginning of 2013 anyone selling a house with a septic tank will have to provide the buyer with an inspection certificate, and if we can’t reach my desired standard we shall probably have to install a whole new system.

I had decided to have two parallel drainage pipes, with the possibility of adding a third at a later stage. This meant that we had to have two 5m trenches, part filled with gravel, and interconnecting pipes and an inspection chamber (“You can see, Monsieur Inspecteur, all is flowing very freely”). 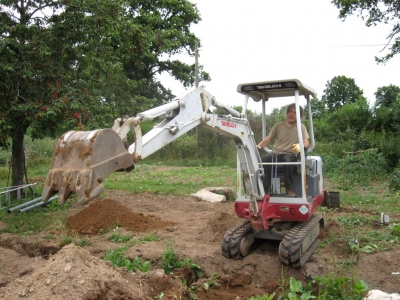 Actually, this is getting easier — though it still requires 100% concentration, and I still make mistakes.

I guess with more practice I shall get quicker!

But I am achieving the desired results, and trenches were dug in no time at all. What would have been a daunting task by hand was completed within a few hours. And no aggravation of the bad back caused by loading the gravel into our trailer. 🙂

The water flows freely, and the surface remains pristine and dry. Only the inspection cover remains as a clue to the new installation. 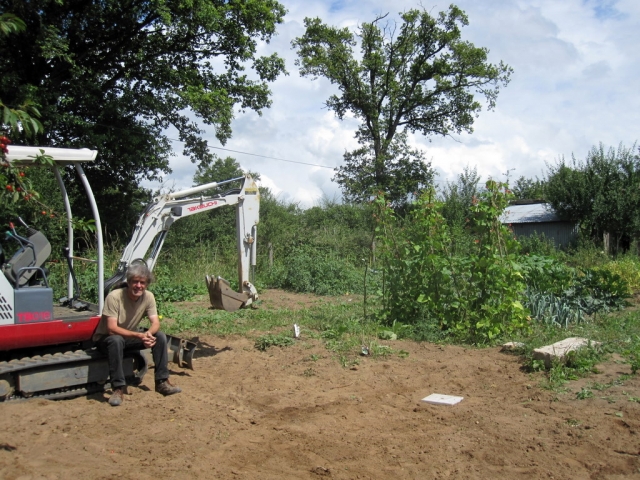 This entry was posted in Life, Plumbing and tagged picture. Bookmark the permalink.

5 Responses to The drains run free